Who Skipped Breakfast This Morning? You Just Increased Your Heart Disease Risk 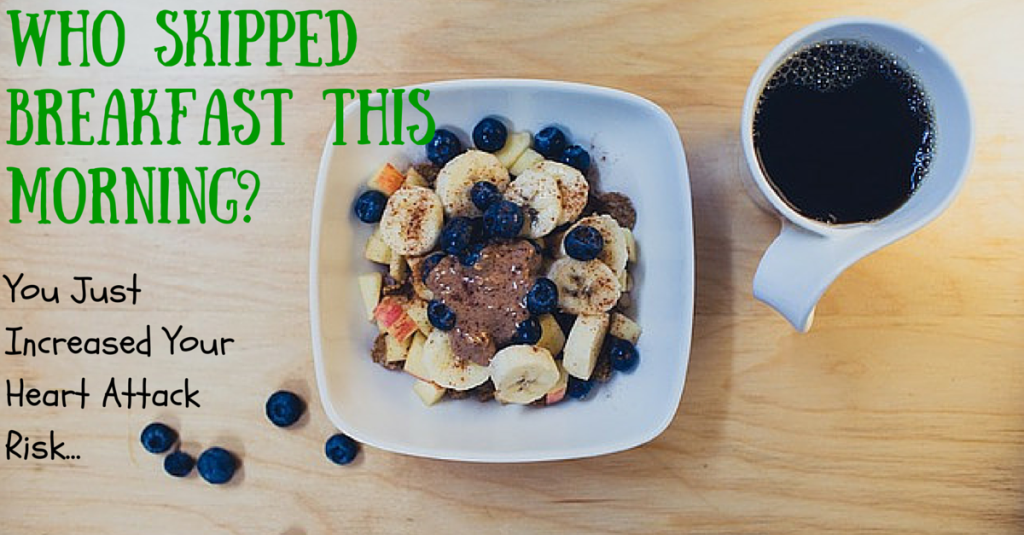 The new study, published in the journal Circulation, finds that men who routinely skipped breakfast had a 27 percent higher risk of having a heart attack or dying from coronary heart disease compared to men who ate breakfast. – NPR.org

According to researchers, skipping breakfast essentially prolongs fasting from the night before, and thus by prolonging this fasting you are putting added strain on the body. Breakfast gives your body the fuel it needs to start the day off strong. Depriving your body of that energy and fuel can have detrimental affects.

Not long ago, scientists and researchers believed that our sleep patterns were directly associated with the sun and the light of day. But, in fact, some new research is beginning to show that our circadian rhythms might actually be a direct result of our eating habits. And, of course, sleep and eating habits are also directly tied into heart health and overall cardiovascular health.

But, we also have peripheral clocks that are located in every cell outside of the brain. These clocks respond to things like our eating patterns and habits.

In the morning, your central clock responds to the light, Yang said. “But if you don’t eat, and you fast, the peripheral clocks respond to that,” creating a dyssynchrony between the clocks, he added. Ueli Schibler, professor of molecular biology at the University of Geneva, said mice with this dissynchrony appear ill, and are not as “active or energetic” as those with synchronous cycles.

The study also showed that eating at the right times can help protect from disease. Past research has shown that women involved in shift work — especially rotating shift work, in which people work during the day one week and during the night the next — have an increased risk of cancer, the study’s lead researcher Min-Dian Li GRD ’15 said. Rotating shift workers are more likely to have dissynchronous body rhythms, increasing their likelihood of becoming diabetic, obese or depressed, Yang said. – YaleDailyNews.com

In Europe, meals tend to be larger during breakfast and lunch, and smaller for ‘dinner.’ In fact, lunchtime in Spain is not at noon, but more like 4pm, and is typically referred to as dinner. And then, in the evening, a light snack is had for what we would typically call dinner.

Just a few years back, statistics shown that Americans were twice as likely to suffer from heart disease than our European neighbors. We were more likely to be obese and suffer from diabetes as well.

Jumping back to the Yale study, both Li and Yang said eating two meals per day may be most beneficial for the synchronization of biological clocks — this advice stands in contrast to findings from nutritional studies showing that eating in small amounts frequently can help with weight control.

For those who wake up early in the morning, eating breakfast and lunch and skipping dinner is best for circadian rhythm synchronization, Yang said. Night owls should eat lunch and dinner as their two meals, he added.

Arginine and Our Biological Clocks

In July of 2012, a study published in the Journal of Advanced Research stated that the benefits of arginine include reduction in the risk of vascular and heart diseases, reduction in erectile dysfunction, improvement in immune response and inhibition of gastric hyperacidity.

The report goes on to say that the demonstrated anti-aging benefits of l-arginine show greater potential than any pharmaceutical or nutraceutical agent ever previously discovered.

Arginine has been clinically proven to enhance short-wave sleep and reduce restless sleep. By improving circadian rhythms, arginine not only benefits the anti-aging process, but improves heart health.