Would You Choose Health and Happiness, or Luxury and Money?

Which would you choose – happiness and health or unhappiness and higher wages? It’s an interesting concept to truly stop and contemplate. Ask yourself this question, sit on it for a while, and then come back to me with your answer. I’m curious as to how many people would give up certain aspects of health, such as a strong heart, and happiness, if it meant a much larger income and the ability to perhaps live a more luxurious life. But, as we all know, money doesn’t buy us happiness.

A new research paper, published using data from the National Bureau for Economic Research (NBER) and co-authored by Harvard Kennedy School Professor Edward Glaeser, is shedding light on the nation’s unhappiest – and happiest – cities. Residents of bigger cities, like New York, are trading happiness for wages and higher levels of satisfaction, according to the study. In fact, the paper came to the conclusion that the unhappiest cities are willingly choosing to be less happy in exchange for higher incomes or lower housing costs. They are choosing money over happiness. – Yahoo Finance

Take a look at the unhappiest cities across the U.S:

“Differences in happiness and subjective well-being across space weakly support the view that the desires for happiness and life satisfaction do not uniquely drive human ambitions,” the authors write.

“If we choose only that which maximized our happiness, then individuals would presumably move to happier places until the point where rising rents and congestion eliminated the joys of that locale.”

Correlation Between Health and Happiness 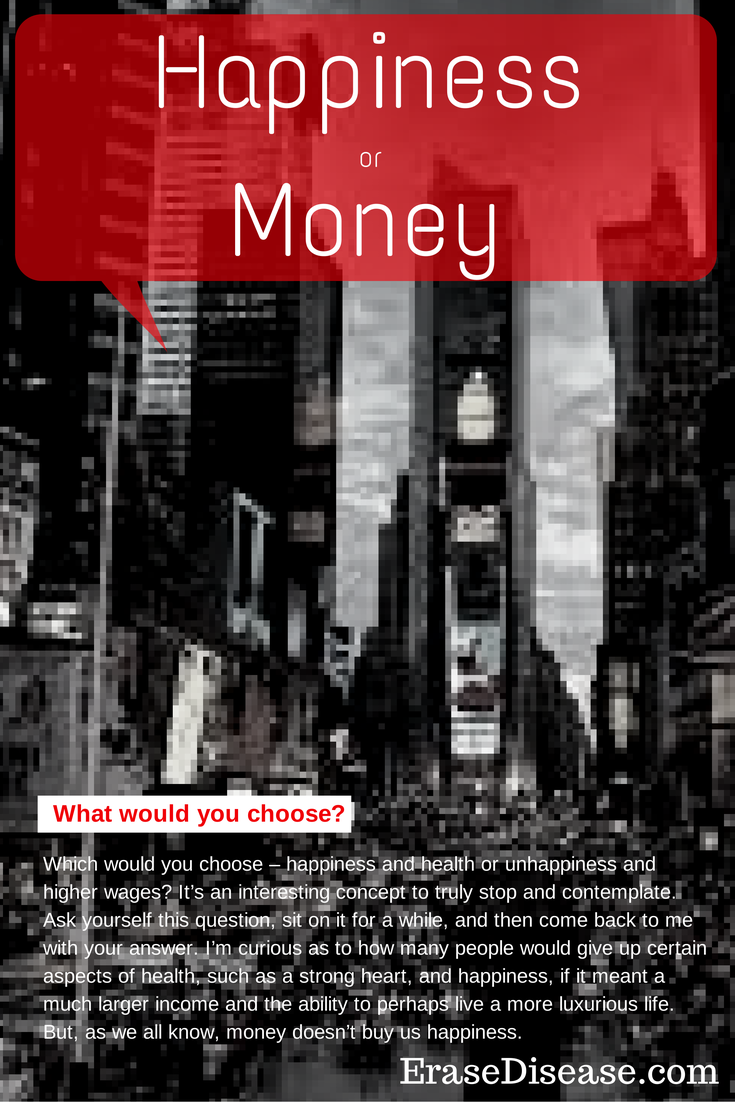 If we’ve said it once here on EraseDisease.com, we’ve said it a million times: happiness and health go hand-in-hand. The studies agree with us:

A 2012 review of more than 200 studies found a connection between positive psychological attributes, such as happiness, optimism and life satisfaction, and a lowered risk of cardiovascular disease. Kubzansky and other Harvard School of Public Health researchers published these findings in the journal Psychological Bulletin.

The Lack of Correlation Between Money and Happiness

I can’t tell you how many times I’ve heard, or perhaps even thought to myself, ‘life would be so much easier if we won the lottery.” The obvious association between money and happiness is implied, and yet can it be true. Can money buy you happiness, thus decreasing your risk for heart disease? If you have the money to lower your stress and make you happy, would that money, in the end, decrease your risk for heart attack and stroke?

It’s an interesting theory, and yet the science does not back it up.

A 2010 study in Proceedings of the National Academy of Sciences found that emotional well-being rises with income up to a point, which seems to be a household income of $75,000. Day-to-day happiness did not increase with higher incomes.

In reality, it’s the experiences that we have throughout life, those moments that create memories, are the things that appear to make us happier then any money can buy. You see, studies have shown that material items, even expensive cars and homes, will make you happy for a time, but the happiness will fade. Memories and experiences do not fade.

“When people spend money on life experiences, whether they also take someone with them or buy an extra ticket or whatever, most of our life experiences involve other individuals,” Howell said. People were fulfilling their need for social bonding while having these experiences, he said. Visit CNNhealth.com, your connection for better living

Another reason for increased happiness in experiences, the researchers found, was that people felt a greater sense of vitality or “being alive” during the experience and in reflection, Howell said.

“As nice as your new computer is, it’s not going to make you feel alive,” he said.

So, what would you rather have – money and luxury or health and happiness?