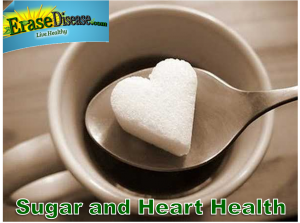 During a two-decade study on cardiovascular health and sugar beverages, the Harvard School of Public Health found that individuals who drank 6.5 ‘sugared beverages a week were 20% more likely to have a heart attack than those who never consumed them.’ While this particular study focused on men only over the course of 20 years, a separate study from 2009 found that women “who drank more than two servings of sugary beverages daily had nearly 40 percent higher risk of heart disease than women who rarely drank sugary beverages.”

Several studies have shown a direct connection between sugar and lipoproteins, specifically the more sugar you ingest the higher your HDL, or bad cholesterol levels are going to be. Back in 2009 the American Heart Association, for the first time, officially took a stand against sugar, specifically sugary beverages.

“The high intake of added sugar has been implicated in a number of negative health outcomes, but primarily this targets obesity,” said Dr. Rachel K. Johnson, lead author of the study that caused the American Heart Association to take such a strong stance. “Sugars have been implicated in high blood pressure and inflammation which are risk factors for heart disease.”

In a recent report published in Hypertension: Journal of the American Heart Association, researchers found that these sugared beverages not only increased bad cholesterol, but are greatly associated with higher blood pressure. The association with bad cholesterol, high blood pressure, even a greater consumption of calories and increased weight gain, as well as diabetes, has proven sugary drinks to be bad for your overall health.

According to a report published in an American Heart Association Journal called Circulation,

It has been proven through scientific research that L-arginine, the precursor to Nitric Oxide, lowers blood pressure and bad cholesterol levels by widening the arteries and facilitating healthy blood flow. For a healthy heart and to lower your risk for cardiovascular disease, follow these simple steps: